This page contains changes which are not marked for translation.
Other languages:
English

The Solar Panel generates power by absorbing sunlight, depending on solar intensity, up to 500W per panel on the moon. Can be manually rotated using a Wrench. Can be built in two configurations, one with opposite side split power/data ports, or two with same side combined power/data ports.

Data ports can interact with Daylight Sensors and logic i/o writers or batch writers to automatically rotate the panel to face the sun.

Can also be destroyed by storms, or left with very little health. Best course of action is to remove the solar panels when you are notified of a storm by a Weather Station, Which allows you to replace them once the storm is over.

They can be repaired with Duct Tape, or by dissembling them and reassembling them. You could even cover them with windows to protect them from storms at the cost of some efficiency of the panels themselves being lost. And Heavy Solar Panels are a more expensive version that do not take storm damage but it is debatable if its worth making the tier 2 metal Astroloy to prevent storm damage whilst retaining maximum efficiency.

There are 4 kinds of Solar Panel Kits:

Basic Solar Panels are the cheapest, but don't have logic inputs so they can not be set up to automatically track the sun. They're useful early on when resources are limited and power needs are lower, but they spend most of their time at reduced power output.
Standard Solar Panels have logic inputs and can be programmed to track the sun for optimal power output.
Heavy Solar Panels are protected against storm damage, but more expensive and require a Tier Two Electronics Printer. Note that not all planets have storms.
Basic Heavy Solar Panels are just a combination of the Basic and Heavy solar panel properties.

Pay close attention to the positioning of your solar panel since their automation will depend heavily on it. Most user-made scripts and guides orient the panels with the data port facing sunset and the power port facing sunrise. 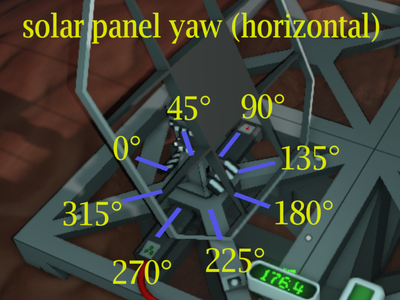 After placement be sure to install one Glass Sheet to make it functional.

Power output of a single Solar Panel on different planets[edit]

These are all Data Network properties of this device.

These are all parameters, that can be written to with a Logic Writer, Batch Writer, or Integrated Circuit (IC10). The outputs are listed in the order a Logic Writer's "VAR" setting cycles through them.

These are all parameters, that can be read with a Logic Reader or a Slot Reader. The outputs are listed in the order a Logic Reader's "VAR" setting cycles through them.