Used to crush ice into liquids and/or gases.

The Ice Crushed has two outputs at the back, which can be connected to Pipes (yellow) and Liquid Pipes (blue) to extract the products. The top output is for Gas outputs, and the bottom output is for Liquids.

Different kinds of Ice can be crushed:

The Ice Crusher can be used to get drinkable water early on, by connecting it to a Water Bottle Filler using Liquid Pipes. This doesn't require connecting gas pipes, the Nitrogen byproduct will simply be released into the surrounding environment. Note however that if done inside, this could lead to pressure accumulating over time, which could be dangerous if not eventually upgraded to a more robust gas handling system. 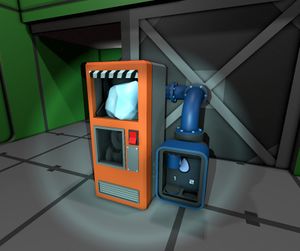